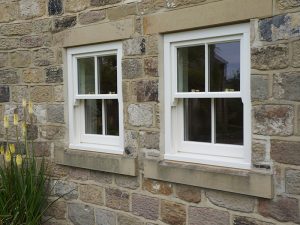 To affirm the quality of wooden sash windows just look at how they have stood the test of time – from first appearing in homes in the 1600s, sash windows remain a quality choice today.

Gracing the exterior of period properties across the UK, wooden sash windows are a favourite feature in heritage homes.

There is no doubt that the history of the sash window stretches back at least a few hundred years to Georgian times, being evident in homes built at that time and onwards through the Victorian and Edwardian period.

How exactly sash windows came to be the go-to window cover of these times is a little less clear with some accounts crediting Robert Hooke as he worked to rebuild the capital following the Great Fire of London.

Other accounts suggest the idea originated in the Netherlands, while further consideration could be given to the idea that sash windows were a natural development from wood shutters.

The enduring popularity of sash windows 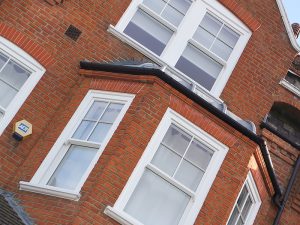 Certainly by the Georgian era sash windows were a key design feature in new properties.

This success is down to the ability of wooden sash windows to help ventilate rooms by encouraging air circulation while also letting plenty of natural light in.

While timber was plentiful at the time, glass creation was still in its infancy and creating large sheets of glass was not common practice. As a result multiple panes of glass would be used within a window, held in place by timber frames.  This accounts for the difference in style between Georgian and Victorian sash windows.

Georgian sash windows usually featured six glass panes on the top and six on the bottom. This reduced over time with Victorian windows often having a split pane on the top and bottom or just a single pane.

As the design would prove enduringly popular, so too would the opening technique after the weight and pulley system was introduced in the early days as a solution to using wood to prop the windows open.

Over time styles adapted to outward opening casement windows, with aluminium becoming a popular choice of material in the 1950s, then uPVC in the 1980s with the need for less maintenance playing a part.

Homeowners wishing to preserve the heritage of their property recognise the importance of continuing to use sash windows – with the added benefits that glass technology has bought in terms of insulation.

Many new homeowners can still enjoy the stylish look of sash windows, using uPVC, while period properties can replace like for like with specially made wooden sash windows.